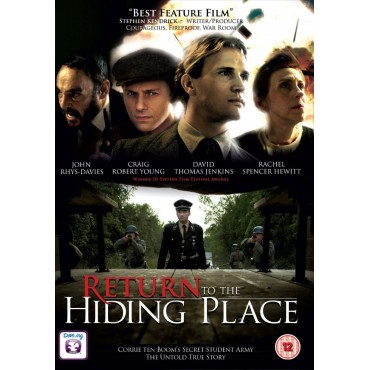 Return to the Hiding Place

Hans, Piet, and their friends navigate a deadly labyrinth of challenges to rescue the Jewish people while embarking on an action-packed hunt with the underground, involving Gestapo hijacks, daring rescues, and stunning miracles. Corrie ten Boom, Holland’s first ever licensed female watchmaker, leads a secret resistance made of university students who work together to save the lives of hundreds of Jews. Based on a true story, climaxing in the true, breath-taking rescue of an entire orphanage of Jewish children marked for mass execution by Hitler’s assassins… Return to the Hiding Place brings you back into the tense world of the original film and boasts a stellar cast including John Rhys-Davies (Evangelist from ‘The Pilgrim’s Progress’ and Gimli, from the Lord of the Rings trilogy), Mimi Sagadin (Princess Cut), and Joanie Stewart (Alone Yet Not Alone).