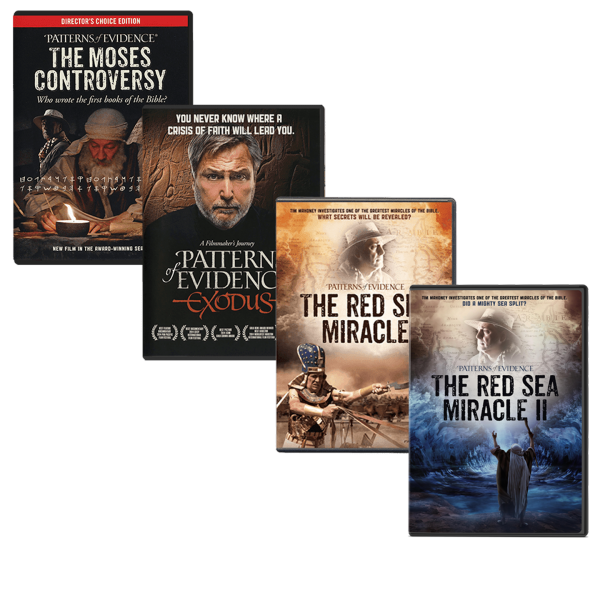 A debate rages over the credibility of the Bible. Most archaeologists today have concluded that there’s no evidence that the Exodus of Israelite slaves from Egypt ever happened. Filmmaker Timothy Mahoney faces a crisis of faith, “Is this foundational event of the Bible really just a myth?” He embarks on a 12-year journey around the world to search for answers.

Patterns of Evidence: The Exodus unlocks the mystery of this ancient saga, combining a scientific investigation with a retelling of the Exodus story to reveal an amazing pattern of evidence matching the biblical account that may challenge our understanding of history. Featuring stunning animations and a cast including Narrator, Kevin Sorbo (God’s Not Dead, Hercules: The Legendary Journeys), interviews with leading archaeologists including Israel Finkelstein, Kent Weeks, and David Rohl, and guest appearances by Israel’s Benjamin Netanyahu and Shimon Peres.

This DVD includes either English Subtitles or Closed Captioning.

Did Moses write the first books of the Bible? Many mainstream scholars say NO! But the Bible states YES! Award-winning filmmaker Timothy Mahoney (Patterns of Evidence: Exodus) is back again, bringing new evidence to light in his latest documentary: Patterns of Evidence: The Moses Controversy.

What Mahoney’s investigation leads to is the groundbreaking discovery that the world’s first alphabet actually originated in Egypt.  Did the Israelites invent this alphabet in the time of Moses to write the Bible?

This thought-provoking and controversial film asks hard questions of some of the world’s leading experts in Egyptology, ancient Hebrew and early languages. Filmed in Egypt, Israel, Jordan, Europe and the USA with stunning cinematography and life-like Biblical recreations, Patterns of Evidence: The Moses Controversy with captivate audiences of all ages.

After leaving Egypt, the Bible describes the Israelites crossing a deep sea that was miraculously split with walls of water on their right and left. When the Egyptians and their chariot force pursued, the water came crashing back down to destroy the entire army. Are miracles of this kind even possible? Tim Mahoney retraces the steps of Moses, looking for answers and finding them!

The Red Sea Miracle Part 2 – continues to raise big questions about biblical miracles.  Introducing the second film in a new two-part series. How could thousands of feet of water be parted at the red sea? Or was the sea merely parted by the act of wind in nature, through a shallow Egyptian lake? Mahoney investigates these locations to see if any have a pattern of evidence matching the bible.

People of faith will be inspired and skeptics will have much to think about as Mahoney reveals two decades of documentary research including if divers found the remains of pharaoh’s army on the seafloor.  This cinematic journey leads him to inquire… “do miracles still happen today?” Learn more in The Red Sea Miracle Part 2 DVD

Join Timothy Mahoney in The Red Sea Miracle Part 2 DVD as he retraces the steps of Moses and the Israelites, looking for answers.  As he investigates the possible locations, he interviews top-level secular and biblical scholars in search for clues that support the bible’s timeline for this pivotal event in history. Now, see the evidence as the bible comes alive with dramatic recreations, 3d animations and never seen before footage.