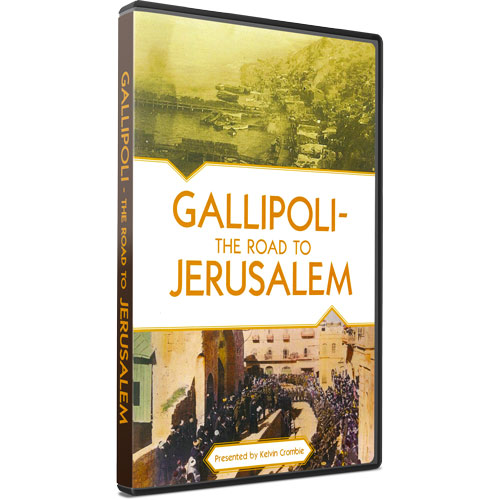 Gallipoli – The Road to Jerusalem

Discover what really took place at Gallipoli in 1917

Find out how a small number of men, the Australian Light Horse and New Zealand Mounted Rifles, together with British mounted and infantry soldiers were able to capture Jerusalem from the Ottoman Empire (Turkey) in World War I.

When Prime Minister David Lloyd George declared in early 1917 that he wanted Jerusalem captured by Christmas, he inserted a new dynamic into the equation.  Jerusalem was of no great strategic or military significance.  Neither Alexander the Great nor Napoleon had it on their list of places to capture.

This documentary (a follow-on from the book of the same title) covers the 1915 Dardanelles (Gallipoli) Campaign in Turkey, which is regarded as one of the biggest Allied defeats of the First World War. Many Australians and New Zealanders, however, deem the 25th April 1915, when their soldiers landed at Gallipoli as a ‘baptism of fire’ and the real beginning of their nationhood.

Was there another dimension to the Gallipoli Campaign other than the battles fought there?

Kelvin seeks to answer these questions as he journeys to Britain, Europe, Turkey, Israel, Jordan, New Zealand and Australia. He discovers, in the process, that a road began in Gallipoli which was destined to lead to Jerusalem.

Kelvin Crombie, is an Australian who lived almost twenty-five years in Israel.

During that time Kelvin worked for twenty years at Christ Church inside the Old City of Jerusalem, mostly as a local guide, researcher and writer, and majored upon British involvement in the Eastern Mediterranean during the period 1798-1948.

Kelvin pioneered the In Step with Allenby and the Light Horse tours in 1988 and guided many Australian, New Zealand, British and American groups retracing the Anzac/Light Horse heritage in the land of Israel.

He has authored ten books, including For the Love of Zion, Journey to Beersheba, El Alamein: Halting an Impending Holocaust in the Middle East and In Covenant with Jesus.