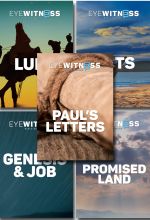 The Eyewitness Bible Series is a fascinating behind-the-scenes study of the people and stories that are bedrock to the Christian faith, ancient stories that still echo with deep signficance for today’s world through eyewitness accounts. The series of narrations are an exploration of Scripture to empower your faith. This set of five includes Luke, Acts, Genesis & Job, Promised Land, and Paul’s Letters.

Luke: The Luke Series is a set of narrations based on the Bible’s book of Luke. Luke said that in writing his book he investigated everything first. His investigation included examining written materials and talking to eyewitnesses. This series is meant to imitate some of the stories Luke might have heard, as well as explore their meaning and importance. This series is true to the Bible but fills in story lines based on history, geography, and imagination. The series is presented in 20 segments.

Acts: Acts is a history of the first three decades of the Church. It is the only existing history of the Church that was written in the first century. Although the Bible does not specify it, Church tradition and many scholars agree that Luke wrote both Luke and Acts. A purpose of the Acts Series is to tell some of the information of the book of Acts from different vantage points. The series illustrates the stories that Luke might have heard from a dozen of the characters featured in his book of Acts. It is presented in 18 segments.

Genesis & Job: Genesis describes the creation of Earth, gives the history of all mankind, and describes a brief history of the Israelite nation from its beginning until it moves to Egypt. All of Genesis is saturated with knowledge about God, his power, and his relationship with mankind. Job is a story of an ancient man, his struggles, and his dealings with God. Although nothing is absolutely clear concerning the time period of his life, it seems as if Job lived in the time before the Israelite nation existed. The Genesis & Job Series is the first of three Eyewitness Bible Series covering the Old Testament. It is presented in 13 segments.

Paul’s Letters: There is treasure hidden in Paul’s thirteen letters, but the path to find it is not obvious. In the Bible Paul’s letters are not sequenced in chronological order. Paul wrote his letters within the two decades of A.D. 48 to A.D. 68. His thirteen generally accepted letters are arranged in the New Testament in two blocks: the nine written to churches, then the four written to individuals. The nine written to churches are generally placed in order by length. This series presents Paul’s letters in 17 segments.

Be the first to review “EYEWITNESS: SET OF 5” Cancel reply