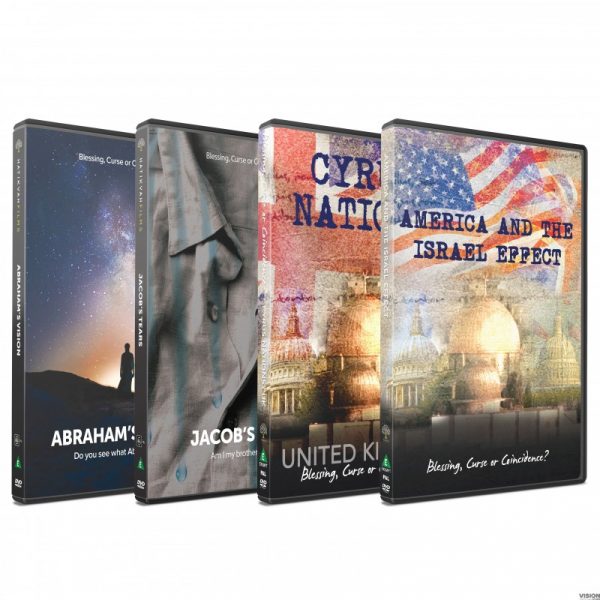 Do you see what Abraham saw?

In this multi-award winning documentary, Bible scholar Lance Lambert takes us on a journey through the historical implications of the Abrahamic Covenant, in which the Lord gave a three-fold promise to the descendants of Abraham, Isaac and Jacob as an everlasting inheritance.

Learn of The Lord’s promised protection for His covenant people, and the fulfillment of His purposes through them, in the declaration: “I will bless those who bless you, and I will curse him who curses you.” (Genesis 12:3) Trace the outworking of this declaration through history, beginning with the Exodus from Egypt, and continuing through the Biblical era to the fall of the Roman Empire. Discover the covenant promises from both a Biblical and historical perspective in the purpose of God.

This DVD is accompanied by Brief Bible Study notes for each chapter, which are suitable for individual or group study.

#2 Jacob’s Tears – Shedding light into the darkest shadows of history.

How could the Holocaust have happened?
Why were the Jewish people unjustly targeted?
Where was the Church?
Could the Holocaust have been avoided?
Do Nazi atrocities still affect the lives of their descendants?
Is healing and forgiveness possible?
Why is Germany enjoying such prosperity today in the light of Gen 12:3?
How should the Church respond to rising Anit-Semitism today?

This feature-length documentary includes powerful interviews with German church leaders, the son of a Nazi SS officer and Holocaust survivors that will move and challenge you.

WARNING: Contains disturbing images from the Holocaust which some viewers may find offensive. NOT SUITABLE FOR CHILDREN.

Presented by Lance Lambert
Produced and Directed by Hugh Kitson

Chapter Two (18 mins)
The Conflict of the Two Crosses

Thousands of years ago God vowed to Abraham that He would “bless those who bless you, and curse those who curse you” (Genesis 12:3). Many individuals, nations, and empires have put God’s word to the test. As one of the greatest superpowers the world has ever known, has the United Kingdom’s history proved the potency and longevity of God’s ancient covenant with Abraham and his descendants?
This documentary film traces the rise and fall of the British Empire alongside Britain’s complex relationship with the Jewish People. What was Britain’s role in the re-birth of Israel in her historic homeland? How did Britain’s rich Christian heritage influence the geo-political factors surrounding the First and Second World Wars? Was the timing and circumstances of the tumultuous British mandate over Palestine merely coincidental? Is the demise of the British Empire a direct result of a forsaken promise?

In ancient times King Cyrus had a unique call to restore the Jewish People to their homeland. Is the UK a modern-day Cyrus?

The United Kingdom – A Heritage Lost?

#4 America and the Israel Effect (55 minutes)

IS THE UNITED STATES A ‘CYRUS NATION’?

The United States of America is the world’s sole current superpower and the wealthiest nation in history.  Has this uniquely blessed nation evidenced the continuing dynamic power of this covenant promise?

In ancient times King Cyrus had a unique call to help restore the Jewish people to their homeland. Is the USA a modern-day Cyrus?