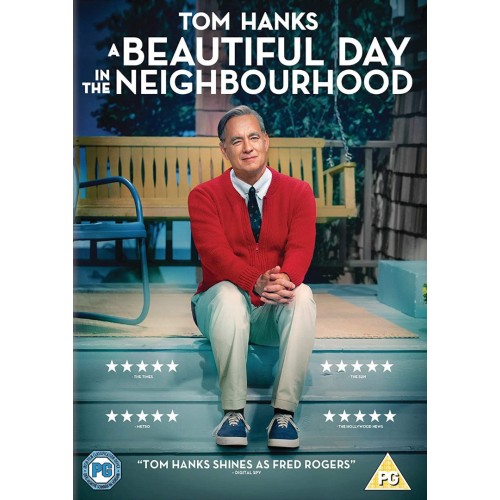 A Beautiful Day in the Neighbourhood

Tom Hanks portrays Mister Rogers in A Beautiful Day in the Neighbourhood, a timely story of kindness triumphing over cynicism, based on the true story of a real-life friendship between Fred Rogers and journalist Tom Junod. After a jaded magazine writer (Emmy® winner Matthew Rhys, 2018 Best Actor in a Drama Series, The Americans) is assigned a profile of Fred Rogers, he overcomes his skepticism, learning about kindness, love and forgiveness from America’s most beloved neighbour.

The real Fred Rogers was an ordained Presbyterian minister who believed that his children’s show was a pulpit of sorts, from which he preached Jesus’ message of unconditional love and boundless mercy (albeit without mentioning Jesus’ name). This movie retains not just that message, but hints at the quiet faith that lay beneath it. We see Fred pray, sometimes to Lloyd’s discomfort. His Bible makes an appearance or two. And when he talks to a dying man, he asks for the man to pray for him.

When Lloyd says that was a kind thing for Fred to do – knowing that this little act of faith would make the dying man feel a sense of purpose – Fred looks at him aghast: Anyone who’s going through what that dying fellow is going through must be especially close to God, Fred says.