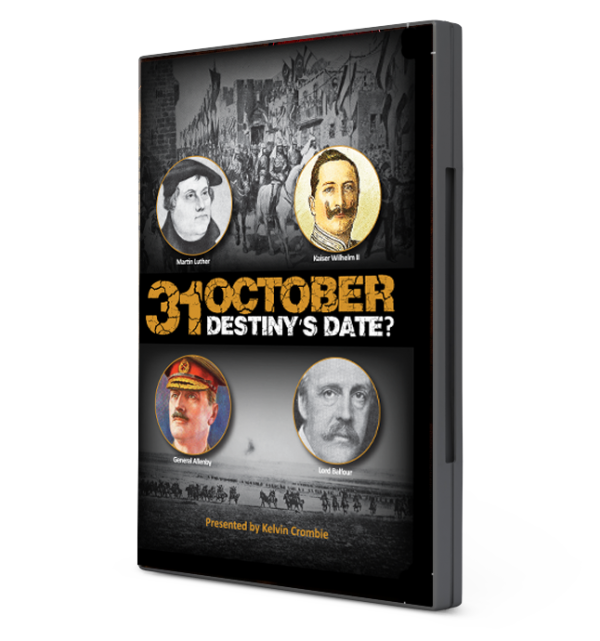 On 31 October 1517 Martin Luther openly challenged the Roman Catholic Church, marking the ‘official’ beginning of the Protestant Reformation.  The central message of the Reformation was the need for a personal relationship with Jesus. It also resulted in the Bible being translated into numerous languages.

Almost simultaneously two other major movements began: the formation of the Ottoman Turkish Empire, and the age of discovery when the European maritime nations sought direct access to the regions of India and the East.

These three movements resulted in British involvement in the land of Israel (Turkish Palestine); in order to preserve its trade link to India and the eastern empire – (Australia, New Zealand and elsewhere); and to present Jesus to the peoples of that region.

From the early 1840’s Prussian-German involvement began in the land of Israel, initially associated with the British.  This involvement resulted in the visit to Jerusalem of the German emperor, Kaiser Wilhelm II, to open the new German Church on 31 October 1898.  Germany was forging a closer link with the Turkish Empire.

This link saw Turkey join with Germany in the First World War.  Turkey’s decision meant the Dardanelles and Suez Canal became strategically important. Several campaigns were fought in the Eastern Mediterranean between 1915-1918 with British, Anzac (Australian and New Zealand) and Indian soldiers fighting against the Turks, Germans and Austrians.

In the event of an ultimate Turkish defeat the Allies had to determine the future status of the regions controlled by Turkey, including Palestine.   On 31 October 1917 the British War Cabinet agreed to establish a national home for the Jewish people in the land of Israel.  On that same day British and Anzac troops won a key battle at Beersheba, a victory often associated with the famous charge of the Australian Light Horse.

This documentary looks at these four major events which occurred on the 31st October.  The links are such that it almost seems as if they were destined to occur on the same day.

Be the first to review “31 October – Destiny’s Date?” Cancel reply